A Slow Boat To China

Marion Scemama, photographer and video artist, lived in New York in the 1980s, in the East Village, where she met David Wojnarowicz. From this meeting, will be born a special and chaotic friendship that will last nine years, marked by absences and returns, mutual support, and many collaborations (photos, texts and videos).

This text is an extract from the masterfully-conducted interview by Sylvère Lotringer.

Sylvère Lotringer: How did you meet David?

Marion Scemama: I think it was in 1983. I was at the pier and met Keith Davis who came with some friends to visit what he painted there. He saw me filming his paintings, so he asked me who I was, what I was doing there, and we started talking. I asked, “Tell me about this place.” And so he told me about this guy, David Wojnarowicz. For me, you know, there was a weird connection between this place and this guy who had opened it. I loved the pier so much that, in fact, I already had a crush on David because of it. When I heard his name, I thought, “This David must be a great guy.”
I tried to reach him, but he was traveling and didn’t get my messages. Then, in December, my friend Brigitte Engler had to do an interview with David for the magazine Ici New York, and I went with her. I was shy and didn’t say a word, but Brigitte introduced me as the photographer. I just listened to him and he had this incredible, very warm, sexy voice. Sometimes he had this goofy look, but he could also be very sexy all of a sudden. He had these beautiful lips. I was very impressed by this guy. We ended up not having the time to take pictures, and I said that I wanted to take photos of him at the pier. So he said, “Well, let’s meet after Christmas, but I will take you to another pier that nobody knows about. I went there with just a few other artists.” So we met at the beginning of January of ’84 to go to the pier and immediately something happened between him and me: a connection, something really strong. David could really have crushes on women. It didn’t have anything to do with sex, but he was attracted to women, that I’m sure about. He could really fall in love if he felt that a woman was strong. It’s not that David was seductive, but he could create this magic of ambiguous desire between two people.
So I took photos of him at the lesser-known pier, Pier 28, in which there was this pterodactyl that he painted on the wall. There was also a room filled with Luis Frangella’s work. So we started talking about terrorism, the Red Army Faction… I have always been attracted to this group. Not only because I was involved in the radical left wing in France, but also because there was the love affair between Andreas Baader and Gudrun Ensslin. I told David about a photo I saw in Paris Match, which is a kind of French Life Magazine, during their trial. It was the first time they saw each other for a very long time. And there’re these photos of Andreas holding Gudrun and just smiling at her. For me, it was so romantic: going to bomb the world and kill and destroy everything but, at the same time, this very romantic love affair. When I told that to David—I just remember that moment—something happened between us.
I didn’t see him for two weeks after that until Dean Savard from Civilian Warfare called me and said, “Marion, David Wojnarowicz is gonna have a show next month in our gallery and he wants you to make the photo for the poster.” And I was really touched by that: touched and shy at the same time because I didn’t know if I could manage it, if I was good enough a photographer. So I went to his apartment on Bowery and 4th Street. In this small apartment—a very East Village apartment—there were all these plaster heads he was preparing for the show. He had all these very strange things on the walls and these words in French, and for me it was great. So we took the pictures for Civilian Warfare in his kitchen. It was our first collaboration.

You went on a road trip with him, right?

He started talking to me about this trip across the US for the book tour of Close to the Knives. But by then he was getting sick and didn’t know how he could make it. I pushed him to choose only a few places instead of everywhere they wanted him to go. He said “I’m just going to do San Francisco.” At some point, he asked me if I wanted to make the trip with him. I bought my ticket.
I was still scared to go on the trip, though. I had a lot of fears. He talked about this being his last trip. It was an opportunity to live something with David, to follow and support him, and keep on sharing things with him. But, at the same time, I knew David could be very hard to deal with. At one point during the trip, we were in Death Valley. The sunset was really beautiful and we talked about how nice it would be to die there. We spoke about David’s death, and we were kidding, you know, imagining how it would be. We would put material on the dry sand and light candles with the sunset and the moonlight. I told him we would all be around and Tom and me would be close. This would never happen, David said. We’d have to put a curtain up, a separation, because it was something we couldn’t share, Tom and me. I started getting a little bit nasty and he admitted that Tom didn’t know I was with him. I thought that Tom was going to know about this one day for sure and then he was going to hate me for it. It wasn’t right do something like that to him and it was unfair to put me in that kind of situation.
But I also felt—because of what he had told me—that I would never be near David at his death. We had already spoken about the way he had photographed Peter Hujar at his deathbed, and he had asked me to do the same for him; it would be like our last collaboration. But then I knew this wouldn’t be possible: he had made it impossible, because he hadn’t told Tom that I was with him.

Don’t you think that for David, it wasn’t just his last trip with you, but the last time he would have a chance to do artwork—and not just any artwork… And he knew he could count on you for that.

I think that’s what pushed him to ask me to make the trip with him: the idea that we would make each other excited about doing art.
Let’s just say it’s something I will never resolve: why he chose me for this last trip. Why me? Tom was really loving, a good person. Tom is somebody who has his feet on the ground and David needed that. I wasn’t that way. I belonged to another world. But maybe he asked me to make this trip, because he knew he wouldn’t be able to give me more than that and he wanted to be with Tom at the end of his life.

(…) And you went back to Death Valley…

We came back through Death Valley but we kept driving. We stopped at an Indian village and David said, “There’s a photo I want to take. Follow me.” He took me through the village and climbed a little wall and down a cliff where nobody could see us. We couldn’t see the village anymore. He said, “You’re gonna help me make a hole, I’m gonna put half of my body in the hole, and then you’re gonna cover me with dirt.” We started digging with our hands. He took off his jean jacket, his sweatshirt, and then he lay down in the hole. Then I took the camera, stood above him with his body between my legs, and photographed him from different angles.
After that, we walked back not saying a word and sat in the car in silence for a few minutes. Then at some point, we held each other’s hand. We stayed like this for a while. Then I realized he was giving me what he wouldn’t be able to give me later: he had made me a witness to his death. He created this image because he knew he couldn’t hold his promise and keep me next to him while he was dying…

It was the last collaboration.

And it was our last collaboration. 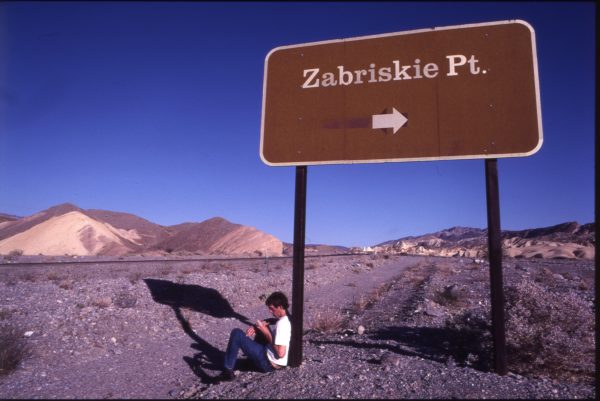